A downloadable game for Windows

This is a battle prototype showcasing Casie's Armor system, Jack's new Support Weapon system, and testing battle timing + game flow in general. This is not a full chapter demo: that would be the Draft Prototype coming out (soon)

Please share any bugs you might find, your experience, and your feedback either here on itch.io, by joining the community on Discord at https://discord.gg/bqyEHMc, by sending an email to jackandcasiedevelopment@gmail.com, or by getting in touch with the developer(s) on Twitter (@shoutscion).

Thank you for your continued support!

• Major rebalancing pass. Enemies in general are less tanky towards the beginning but become tankier towards the end of the Pasture Plain
• Addressed a shitload of bugs- heres some of the funny ones
Phantom eggs appeared at the edges of certain attack animations
Casie would tell this one particular possibly-sad story about Parker (from the original kickstarter demo / chapter 1) over and over until it lost all meaning
Batteries were inert and did not shock targets
You could sneak into Stomping Ground and Traveler's Town '06 and discover that theres nothing fuckin there
Casie could not use her melee attack, to the disgust of backers everywhere
Myriad crash bugs, including one directly related to ***kb*tt (which might not even be fixed)
Clearing the game too fast actually resulted in two shops overlapping one another, making speedruns even more rewarding (?)
Cooking a frying pan and then losing the pan no longer causes the frying pan to continue making a frying sound from the ether
• Bacques Dau is now characterized less as a sympathetic metal slime/ walking moral dilemma type character and more like a less morally ambiguous big asshole coward
he's still a jpeg, though
• Made Imelman even more of an asshole
• Massive changes to enemy placement (mostly for the sake of the demo: liable to be rolled back)
• Improved controller support *slightly*. Better than Uprising, but not better than nothing
• Minor rewrites to a lot of the dialogue + new dialogue due to the expanded role of Bandit
• Grey gives actual useful advice now
• Added new items: armor piece "Overhead", "J-Thunder", and "Engine Block".
goofball shit still MIA, but now we're getting there

• Polished the shit out of everything
Double checked that no remaining shit was visible
This refactor came through after all
• Casie has perfect-ish accuracy while throwing items and cannot deal less than 1 damage
• There is now a tangible difference between Critical and Technical attacks:
Critical attacks trigger Rush, and activate when you hit an enemy weakness
Technical attacks occur if you land a Critical during a Rush's free turn. Technicals deal bonus damage, but do not refresh the Rush
(Critical attacks can be landed at the -end- of a Rush, triggering another Rush)
(This is mean.)
• Casie cannot be one-shotted in any situation: she now 'gates' especially powerful attacks, surviving at 0 health, as long as she had more than 0 to start with. Theoretically she can be one-cycled, but only theoretically
• Machine Guns now generally apply a status effect called "Chasing", temporarily lowering enemy accuracy. Attacking the same target with a machine gun multiple times increases the weapon's hit rate significantly
• Rust Worm now makes a noise when you meet him
• The Field Guide has been buffed to give you even more information. You can now examine enemies directly, with Shift, during battle (as long as you have used the Field Guide on them at least once)
Examining enemies also gives you information on their status effects
Examining Casie also gives you information on the current state of her armor
Examining Jack gives you a headache
• The broken form of Jack's Support Weapons now can be scrapped directly into the Repair Kit
In general, more enemies drop items that can be repaired into Jack's Support Weapons
• Zenny values in general make more sense
• Enemies are much more predictable and generally deal consistent damage, but also have larger 'movesets' and can do more things to impede you
• Lots of options to customize the amount of information the game gives you:
Complex Combat Readouts give you more information on hit rates
Dialogue Autoscroll
Subtitles
Controller support
'Multitap' support: all connected controllers affect the same cursor
No I'm not changing this, this really is intended behavior
People say 'its not a bug its a feature' all the time but no, I'm serious, this really is a feature
• Support Weapons can be used instantly, as long as Jack is ready, instead of having to wait to fill up the bar
• A combat log is available on the Pause menu (P) at any time. This is slated to expand into a general conversation log as well
Thanks Woolie
• The quick-reference control thing has been moved to the Pause menu, and is no longer visible on main play screen
Eat shit Woolie
• SAVES
Only singular saves for now but multiple saves are possible
• Framework for achievements and special responses (because we got saves to work)
Some examples:
All-Range Attack
In a single rush, crit/tech with a shotgun, machine gun and sniper rifle
By the Numbers
Fire an attack with over 300% accuracy and hit
Adjusting Sights
Fire an attack with over 300% accuracy and miss
Unnatural Survivor
Get Casie to hold out at 0 health for 5 enemy attacks
Fur e Ezaru Mono
Clear a stage (not a segment!) without Casie ever taking damage
Google it
None of these achievements are actually in the game yet. They are just examples
The system right now is mostly used for Jack and Casie's conversations however, so it at least it seems to work
• Jack and Casie now usually talk *outside* of battles, so they are not talking over their own damage numbers
If they talk during battle its usually very brief so as not to talk over their own damage numbers
No guarantees that this strategy actually works
• Items no longer mysteriously despawn after Casie uses them, and you will only lose them through inattentiveness
This was an actually fairly elaborate bug: what used to happen when a new item was placed into the feed was that the new item would 'shunt' other items in the same place up. In the original prototype, when Casie used a weapon, she put it back at the very top of the feed, and in some circumstances this item would continuously be 'shunted' by new item spawns until it was unreachable. In the new version, items simply don't spawn if there are enough items in its way, giving items already in the feed priority.
• Some of the goofball shit from the original demo (ie. Grenades, Drill Arm, Grenades) are not integrated yet. They will return
Some of it has been replaced with other goofball shit, like Crates. The quotient is currently about 0.6x goofball shits
• (Fan) Translation support!
For only like half the game! (Chatter and combat lines are currently untranslatable)
(We'll fix this)

And You! : unless you didn't back the Kickstarter

Play directly from folder, or extract entire .zip to desktop.

DO NOT just extract the .exe: the game will not run, and you'll look ridiculous

I just noticed this demo! I've been trying to keep up with this game since I first fell in love with it after seeing it on Super Best Friends Play, but I guess this just slipped through the cracks.

I ran into a glitch during what looked like the final boss, in which all of the turn bars- including the boss'- stopped filling.

Everything else seemed to be fine for the most part: the idle animations still worked, the "conveyor belt" kept moving, I could still pick things up, cook, fill my cooler (cool addition, by the way) with said food, reload weapons, and even use items like the repair kit. Anything that involved the movement or combining of items seemed to work as usual.

What I *couldn't* do was attack or eat with Cassie, use support items with Jack, or be attacked by the Bacques Dau.

Love the new demo, although an early issue I got was when I was playing with the controller plugged in. I didn't use the experimental gamepad mode but even then when I took damage the controller kept rumbling until I shut down the game. 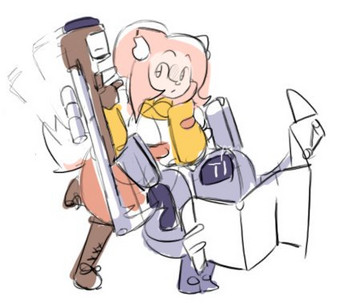